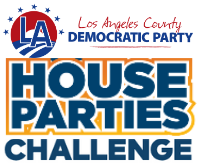 All LACDP Chartered Clubs and Organizations are being asked to host one or more Virtual House Parties from now through Labor Day as a part of the California Democratic Party's call for 1000 grassroots House Parties! House Parties are a way to connect friends, family members, club members, Democrats and more to engage on issues, experiences and more that are going to help us win in November.

Is your club up to the challenge!?

United Democrats of the San Gabriel Valley  Tied for Third